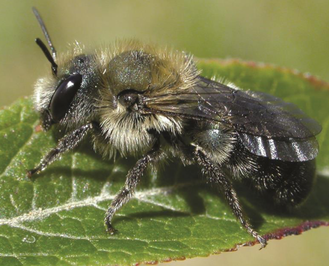 Osmia tersula, an indigenous pollinator of the Côte-Nord region, as an alternative to commercial beehives for the pollination of fruit and greenhouse crops
Student: Mathilde Bouchard; collaborator: Ève-Catherine Desjardins (CEDFOB)

Northern communities are reluctant to exotic pollinators introduction on their territory. It is of great interest to put in place pollination systems involving indigenous bees that will support communities in their desire to develop the agri-food sector without introducing exotic pollinators. Osmia tersula (Hymenoptera: Megachilidae), a solitary bee well adapted to the Côte-Nord northern climate, demonstrates a great potential to serve as pollinator in greenhouse crops. Indeed, characteristics such as its potential to live in a closed environment, to withstand significant temperature differences and to live in groups allow to consider its use in greenhouse crops. The research project will help to document Osmia tersula biology, as well as its behavior in greenhouses and its ability to gather pollen from different plant species. Results should provide a local and effective alternative to commercial pollinators, in addition to the development of a breeding protocol and an introduction schedule for greenhouse crops. 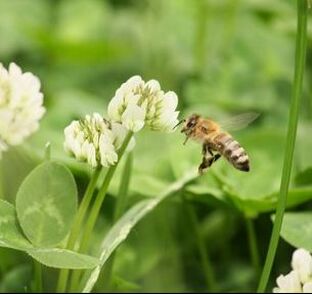 Improving the performance and resilience of urban ecosystems through the biodiversification of ground covers
Student in co-supervision: Anaïs Grenier; principal investigator: Guillaume Grégoire (Université Laval)
​
​Lawn areas, generally composed of Kentucky bluegrass (Poa pratensis L.), are ubiquitous in urban areas. They constitute a simplified ecosystem with low plant biodiversity. Considering their spatial importance, these areas have great potential for improving biodiversity which could increase their services to the ecosystems. The search for alternatives with lower maintenance is also very interesting for municipalities. Thus, this project focuses on the introduction of herbaceous plants that can serve as alternative ground covers to grass to improve resilience to different stresses and promote the attraction of urban pollinators. It takes place more particularly in the parks of Quebec and Montreal. 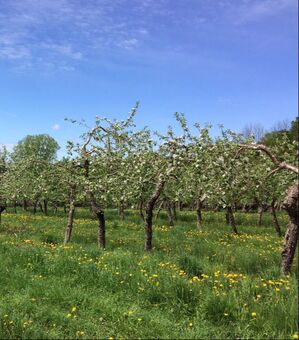 Quebec northern climate requires vigneron to protect the vines during winter. Protective geotextile, as opposed to hilling, reduces soil disturbance. Therefore, this new cultural technique allows the establishment of perennial cover crops on the row which, traditionally, is bare soil. This practice aims to reduce the agricultural weeds competing with the vine and affect production as well as fruit quality. However, few studies assess the integration of perennial cover crops in viticulture, their impact on the ecosystem under the canopy and if they will promote auxiliary insects. The master project evaluates the populations of soil arthropods in order to understand the influence of these new crops on the vineyard biodiversity and the crop auxiliaries. 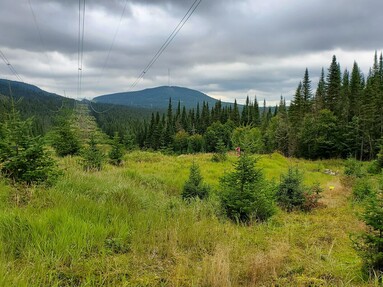 With the arrival of the spruce budworm in New Brunswick, a new management approach is being explored: The Early Intervention Strategy. On these sites, the composition of the Lepidoptera community will be assessed using a molecular approach that combines TaqMan technology and quantitative PCR. This technique will allow us to identify the species and detect the presence of developing parasitoids. Then, the results will provide a better understanding of the impacts of these treatments on the spruce budworm’s food web. The protocols could be adjusted to maximize efficiency while also limiting non-target impacts.

Abeilles citoyennes is a participatory science project aimed at inventorying the biodiversity of wild pollinating insects (bees and syrphids) across Québec. Led by a research team from Université Laval, the project calls on the public for help in collecting data on the distribution and abundance of pollinating species in the main agricultural regions of Québec. It aims to describe and study their diversity according to the characteristics of the landscape.
Project's website : http://abeillescitoyennes.ca/ 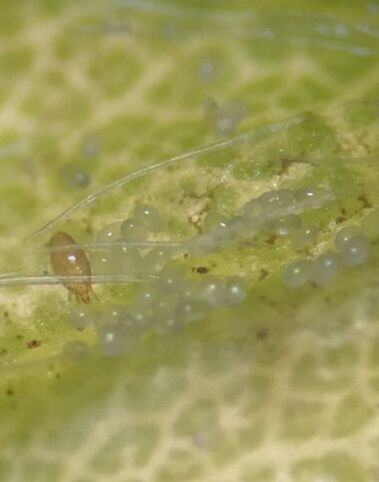 The cyclamen mite (Phytonemus pallidus) has become a major pest in Québec’s strawberry fields in recent years. As control methods remain limited since the removal of endosulfan-based pesticides in 2016, the objective of this study is to adapt a controlled atmosphere technique developed and now used at large-scale in the Netherlands. By exposing strawberry plants to an atmosphere enriched in CO2, depleted in O2 and to high temperatures, cyclamen mite mortality rates could be greater than 99% without negative effects on plant growth. The efficiency of this technique will be tested in pre-planting on different strawberry cultivars and types of strawberry plants using a modified hermetic box. As strawberry transplants are believed to be the main source of cyclamen mites, the obtention of pest-free planting material would allow producers to reduce pesticides’ applications in the field during the growing season. 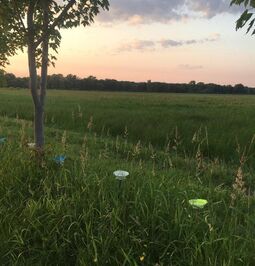 I study abundance and biodiversity of wild bees and pollinating flies as a response to different types of landscape that represent an agricultural intensification gradient in four regions around the Lac-Saint-Pierre. This lake is a unique and important ecosystem in Québec with respect to its biodiversity, thanks in part to its wetlands, but agriculture has many negative effects on it. This project takes part in a large research axis lead by McGill, UQTR and Université Laval, and whose projects focus together on restoring the ecosystem of the Lac-Saint-Pierre.
​ 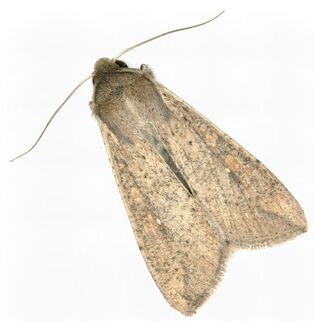 Optimisation of monitoring techniques for the True armyworm (Mythimna unipuncta)
Student: Sandrine Lemaire-Hamel; principal investigator: Julien Saguez (CÉROM)
​
The larvae of true armyworm, a migrant Noctuidae (Lepidoptera), feeds on many crops and can cause major economic losses. The monitoring of Québec's populations is realized with pheromones traps by the ''Réseau d'Avertissement Phytosanitaire - Grandes cultures'' (RAP) in order to enable its scientists to predict future crop damages. This approach is therefore part of a complete Integrated Pest Management Program. Unfortunately, there is not always a link between the moths captures and crop damages, making it difficult to precisely predict the need for future treatments. It is important to document the true armyworm’s biology and behavior because little recent information is available. To study the possible impacts of climate changes on the insect, many techniques will be used (captures, behavioral studies, flight tunnels tests, etc.). These results will enable the RAP to better inform the provinces' farmers about the scale of the insect’s threat as well as advise pertinent protection measures. 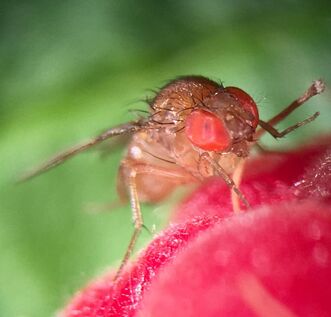 Development of a biological control strategy against the spotted wing drosophila, Drosophila suzukii, using the complementarity of natural enemies in fall-bearing raspberries in Québec
Student: Phanie Bonneau; principal investigator: Annabelle Firleij (IRDA)
​
The spotted wing drosophila, Drosophila suzukii Matsumura (Diptera: Drosophilidae), or SWD, is an invasive pest and is considered a major economic threat to berries in North America and Europe. Unlike other fruit flies that prefer decaying fruit, SWD causes damage to ripe fruits just before harvest, making them unmarketable. In Canada, raspberry, strawberry, blackberry, blueberry and cherry crops have been the main crops affected by SWD since its invasion in 2009. Synthetic insecticides are currently the main control method used against this pest. However, the preharvest intervals between repeated applications, the risk of pesticide residues on fruit and the rotation of available products have created a real headache for Canadian growers struggling with SWD. This PhD research project aims to develop a biological control strategy against SWD, which will provide a promising and sustainable solution for berry growers in Canada.

Malnutrition is increasingly thought to be one of the leading causes in the decline of pollinators worldwide. It is aggravated by the generalization of crop monocultures, which constrain many pollinator species to monotonous diets. Corn, even though it is mostly considered as wind-pollinated, can be an intensively used pollen resource for honey bee colonies but also for wild bees. Despite this, we are still lacking information on the effects of corn pollen, and more specifically on how deficiencies in essential amino acids (EAAs) and vitamins in this crop might affect bee health, cognition, behavior, reproduction, survival and ultimately colony growth. Given that corn is the main crop grown on a global scale, often associated to massive monocultures, studying how it can affect pollinators from a nutritional perspective is of key concern in ecology. Specifically, we are studying the benefits of sunflower pollen for bumblebee performance and health in Southern Quebec.

Milkweed is an emerging crop whose fibre has exceptional insulating qualities, in addition to providing essential habitat for the monarch's declining populations. When populations of milkweed leaf beetle are high, they can devour entire plants and reduce yields. Since few phytosanitary control products are available in the cultivation of milkweed, this project aims to develop alternative practices that are effective and safe for health and the environment. In preliminary trials, the efficacy of mass trapping with floral attractants and applications of a biopesticide based on Beauveria bassiana, an entomopathogenic fungus, were evaluated.

The decline of pollinating insects has been studied more since the last decade. However, protocols vary across countries, provinces, and even within a single research laboratory. This study therefore aims to increase our knowledge of the sampling practices for different taxonomic groups such as bees and syrphids with the help of colored pan traps. 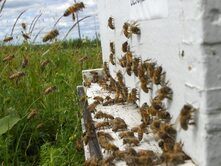 ​Apple production requires pollination from pollinating insects to ensure good yields and fruit quality. As apple blooming occurs early in the season, when it's relatively chilly for honey bees, wild pollinators, and particularly bumblebees, often appears the most efficient. It is however important to make sure that they have access to abundant and diversified floral resources throughout the season and after the wealth of the apple bloom. This project aims at evaluating the efficiency of planted flower strips in apple orchard to maintain healthy bumblebee populations. Winter mortality of bumblebee queens is achieved with the capture-mark-recapture technique.